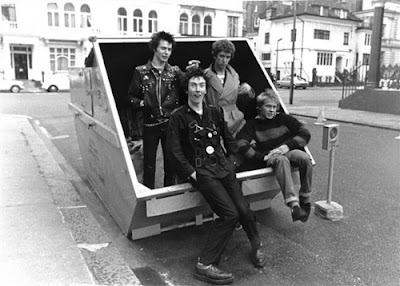 Time for a bit of Italy.
Don't worry, not italian music (not yet...): Italian music journalism and critics' choices. Some years ago I started writing for a rock magazine called Il Mucchio Selvaggio, a rather venerable one in Italy. At that time Il Mucchio was a weekly mag (today, it's monthly) and had a great insert called Classic Rock, about, well, classic rock. The central pages of it were occupied by historical charts. Top 10 punk albums, Top 10 blues albums, Top 10 indie-rock albums, and so on. It was the end of the Nineties: Napster, P2P, iTunes (and Spotify, of course) were just dreams in some brilliant and geeky minds. And in my mind, too. I daydreamed the chance of listening to those albums, quickly, easily, without having to rob a bank for buying all the cds. Exactly what I can do right now, thanks to Spotify.
Some days ago I dared to take a look in the deepness of my closets, and I found the full collection of Classic Rock inserts. So... 2 + 2 = 5... a new Spotirama series was born! Periodically, I will create Spotify playlists from Classic Rock charts. Rock critics from Il Mucchio are very good. Trust me. I'm not one of them. :o)

So, let's roll.
From Classic Rock #1: Punk '77 - I dieci album fondamentali
Here's what Eddy Cilia wrote about it (awful english translation is mine):

"Some things happened in the october of 1977...
In UK Sex Pistols, after the 4th scandalizing single (Holidays in the Sun), published their first (and only) true lp, Never Mind the Bollocks. It changed rock music, forever. At the same time, X-Ray Spex got out the schizoid Oh Bondage Up Yours. In France, it was the debut of brilliant Metal Urbain. In the U.S., first album for Stiv Bators' Dead Boys. And in Italy? On the newsstands, local music aficionados found a new magazine, bizarrely named with the title of a western masterpiece by Sam Peckinpah (Il Mucchio Selvaggio = The Wild Bunch), with Neil Young on the cover, 32 pages, homemade design. It featured blues, country, folk. And punk? The only clue something important was happening in rock territory was an ad page, bought by RCA, to promote - among the others - Ramones' Leave Home.
Since then, Il Mucchio Selvaggio, abundantly made amends for that incredible underestimation of punk. Since 1980, it started promoting loudly every important new act. Never forgetting that in music - like in chemistry - nothing starts from nothing: you can't understand the present and imagine the future without knowing the past. This monthly feature, that begins in this publication, is meant to give young readers an easy tool to get the basis of history of rock (and not only rock). And to give expert readers a nice recall, some thorough examinations and the chance to get angry for the exclusions in the charts we will regularly compile. No problem, we're all national football team's managers.
We liked the idea to start from the year of birth of Il Mucchio. Punk quickly burned its revolution, melting with other sounds, evolving in hardcore or decaying in a way that finally showed its reactionary nature. Just few albums from the contemporary punk scene deserve the ink used to write about them. But classics are classics. And... well... actually 1977 began in '76 and ended in '78. Following punk, even the good one, is something different. We'll talk about it, later."

* In the lite playlist I added three songs from Sham 69's Tell Us the Truth, taken not from the original album but from a collection available on Spotify.
Pubblicato da Luca Castelli a 11:51 PM 1 comment: 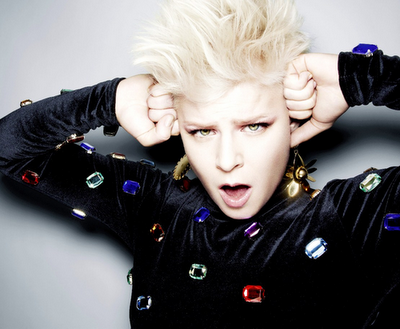 Robyn: "Best new music! Wooah!"
Back from holidays, time to start spotiplaylisting again. :o)
This is the update of a mixtape I started last month, featuring Pitchfork Best New Music of 2010. Three songs each album, to get a taste of them. In bold, the albums I added in this update. Enjoy! 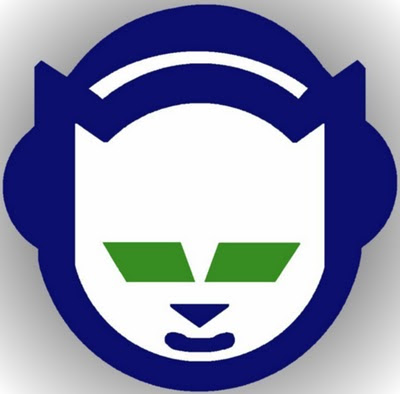 The last golden era of cds, before him...

Third chapter of the Now! collection. Since 1995 to 2000, pop music lived its decadent heyday before the advent of Napster and digital revolution. FM radios and MTV got crowded with teen bands (urgh!), nu-metal, some last britpop things, Hanson's MMMBop and Aqua's Barbie Girl. Enjoy the mix! :o)

Listen to it on Spotify: HTTP Link, URI.


Now #31 (1995, 29/40)
Wet Wet Wet – Don't Want To Forgive Me Now
Edwyin Collins - A Girl Like You Pulp – Common People
Supergrass – Alright
Shaggy – In The Summertime
Ini Kamoze – Here Comes The Hotstepper
Dana Dawson – 3 Is Family
Jam & Spoon – Right In The Night (Fall In Love With Music)
East 17 – Hold My Body Tight
Boyzone – Key To My Life
Seal – Kiss From A Rose
Kirsty MacColl – Days
The Human League – One Man In My Heart
Portishead – Sour Times
Oasis – Some Might Say
Weezer – Buddy Holly
Del Amitri – Roll To Me
EMF – I'm A Believer
Duran Duran – White Lines (Don't Do It)
Jimmy Somerville – Hurt So Good
The Outhere Brothers - Boom Boom Boom MN8 – I've Got A Little Something For You
Montell Jordan – This Is How We Do It
D:Ream - Shoot Me With Your Love (Loveland's Pop'd Up Mix) Baby D. – (Everybody's Got To Learn Sometime) I Need Your Loving
Jinny – Keep Warm
Livin' Joy – Dreamer
Whigfield - Think Of You
Clock - Whoomph! (There It Is)
Bobby Brown - Humpin' Around
PJ & Duncan – Stuck On U
Love City Groove - Love City Groove
Black Mambazo (feat. China Black) - Swing Low Sweet Chariot
Soul II Soul - Love Enuff (Maserati Up Tempo Mix Edit)
Junior Vasquez – Get Your Hands Off My Man (Nush Chocolate Factory Mix)
Shiva - Freedom Billie Ray Martin – Your Loving Arms
Deuce - I Need You (Eurostar Mix) JX – Son Of A Gun
Hyperlogic – Only Me

Now #33 (1996, 32/40)
Queen – Too Much Love Will Kill You
Oasis – Don't Look Back In Anger
Babylon Zoo – Spaceman
Supergrass – Going Out
Pulp – Disco 2000 (7" Mix)
Cher – One By One
Meat Loaf - Not a Dry Eye in the House
Enya – Anywhere Is
The Connels - '74-'75 Boyzone – Father And Son
Blur – The Universal
Paul Weller – Out Of The Sinking
Cast – Sandstorm
Mike & The Mechanics – All I Need Is A Miracle '96
Status Quo & Beach Boys – Fun, Fun, Fun
Terrorvision – Perseverance
Lush – Ladykillers
The Levellers – Just The One
Radiohead – Street Spirit (Fade Out)
Oasis – Live Forever
Lighthouse Family – Lifted
Eternal – Good Thing
Etta James – I Just Want To Make Love To You
Simply Red – Never Never Love
Gabrielle – Give Me A Little More Time
East 17 – Thunder
Luniz (feat. Michael Marshall) – I Got 5 On It
Kaliphz (feat. Price Naseem) - Walk Like a Champion Shaggy – Why You Treat Me So Bad
Baby D - So Pure
Gat Decor - Passion (Do You Want It Right Now Edit)
Gusto - Disco's Revenge
Ken Doh - I Need A Lover Tonight
Ace of Base – Beautiful Life
Louise – In Walked Love
Dubstar – Not So Manic Now
Saint Etienne – He's On The Phone
Dreadzone – Little Britain
Goldbug - Whole Lotta Love
Technohead - I Wanna Be A Hippy

Now #37 (1997, 36/41)
Hanson – MMMBop
Eternal (Feat. Bebe Winans) – I Wanna Be The Only One
The Cardigans – Lovefool
No Doubt – Just A Girl
Sash! (feat. Rodriguez) – Ecuador
No Mercy – Where Do You Go
Spice Girls – Who Do You Think You Are
Ultra Nate – Free
Rosie Gaines – Closer Than Close - Mentor Original Mix
George Michael – Star People '97
En Vogue – Don't Let Go
Shola Ama - You Might Need Somebody Coolio (feat. 40 thevz) – C U When U Get There
Warren G (feat. Ron Isley) – Smokin' Me Out
R. Kelly – I Believe I Can Fly
Damage – Wonderful Tonight
911 – The Journey
Boyzone – Isn't It A Wonder
Backstreet Boys – Quit Playing Games (With My Heart)
N-Tyce – Hey DJ! Play That Song
Foxy Brown – I'll Be
Wet Wet Wet – If I Never See You Again
U2 – Staring At The Sun
The Verve – Bitter Sweet Symphony
The Seahorses – Love Is The Law
Ocean Colour Scene – Hundred Mile High City
Robbie Williams – Old Before I Die
Cast – Guiding Star
Paul McCartney - Young Boy Sheryl Crow – A Change Would Do You Good
Radiohead – Paranoid Android
Texas – Halo
Supergrass – Sun Hits The Sky
James – Waltzing Along
Blur – On Your Own
Fun Lovin' Criminals – Scooby Snacks
Orbital – The Saint
Brainbug - Nightmare
The Course - Ain't Nobody
Todd Terry (feat. Martha Wash & Jocelyn Brown) - Something's Goin' On
P. Diddy – Give Me Love

Now #42 (1999, 31/40)
Boyzone – When The Going Gets Tough
Steps – Better Best Forgotten
Cher – Believe
Steps, Tina Cousins, Cleopatra, B*Witched & Billie - Thank Abba For the Music Spice Girls – Goodbye
Honeyz - End of the Line Billie – Honey To The Bee
The Corrs – What Can I Do (Tin Tin Out Remix)
Emilia – Big Big World
Tina Cousins - Killin' Time 99 Vengaboys – We Like To Party! (The Vengabus)
Cartoons – Witch Doctor
Ace of Base – Always Have, Always Will
Blockster - You Should Be
A+ - Enjoy Yourself
Deetah - El Paradiso Rico
Emmie - More Than This
DJ Sakin & Friends – Protect Your Mind (For The Love Of A Princess) (Lange Remix)
Fool Boona - Popped Sash! – Colour The World
Justin – Over You
Robbie Williams – Strong
Lenny Kravitz – Fly Away
Fatboy Slim – Praise You
Armand Van Helden (feat. Duane Harden) – U Don't Know Me
Mr. Oizo – Flat Beat
The Cardigans – Erase / Rewind
Stereophonics – Just Looking
The All Seeing I – Walk Like A Panther
The Divine Comedy - National Express Terrorvision – Tequila (Mint Royale Shot)
The Beautiful South – How Long's A Tear Take To Dry?
Roxette – Wish I Could Fly
911 – A Little Bit More
Dru Hill – These Are The Times
Kele Le Roc – My Love
All Saints – War Of Nerves
Ladysmith Black Mambazo – Inkanyezi Nezazi
Blur – Tender
Dusty Springfield – You Don't Have To Say You Love Me 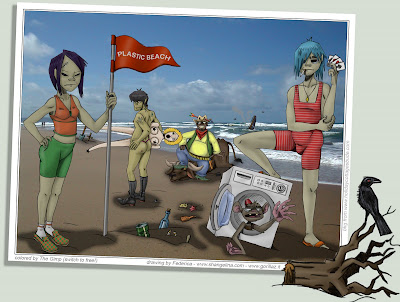 
Are you sure you catched all the best music of the year? Or, while you were distracted by your lovely girlfriend or by a football match, something missed from your listenings? NPR helps us getting a summary of the first six musical months of 2010 with a listeners' survey. The results? A chart of the top 50 albums of the year so far. Just not to leave anything behind. #1 is Gorillaz's Plastic Beach, with The National's High Violet and Black Keys' Brothers on the podium. Here you can find the whole list and some words from NPR guys. Below, the Spotirama Spotify playlist. In the usual double edition: a mammoth with the complete albums (43 out of 50 are available on Spotify) and a lite baby with just three songs each album. Enjoy!